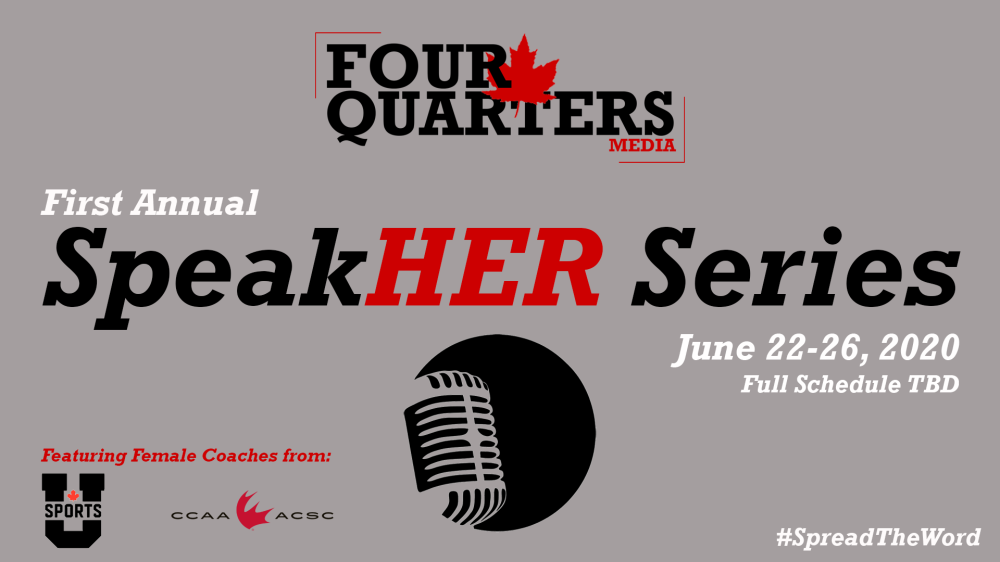 CANADA — From the grassroots level to the International stage, Women’s Basketball is on the rise in Canada.

At the university and college levels, the growth is especially true.

Each and every season, the level of parity in all leagues continues to grow. The talent level is always changing for the better, and more and more teams find themselves competing for both Provincial and National Champions with each passing season.

Yet, the Women’s Game in Canada doesn’t get the level of attention it deserves.

It’s time to change that.

We’re putting the spotlight firmly on Women’s Basketball in Canada, highlighting female coaches from coast-to-coast while trying to inspire the next generation of basketball minds.

We are introducing the First Annual SpeakHER Series, powered by Four Quarters Media.

The focus of the event is to provide players, coaches, and parents with an opportunity to hear from some of the top Female Coaches across Canada in a live Question and Answer setting. Our goal is to highlight the different paths that these coaches took to get to where they are today, all while offering words of encouragement and support to the next generation of basketball minds.

Here’s what you need to know about the event:

WHO: Female Coaches from across U Sports and the CCAA, with some potential special guests along the way; moderated by Tyler Bennett (Founder, Four Quarters Media) and a Special Guest Host (TBD)

WHERE: Zoom Meetings (Links to be posted on Social Media the morning of each day)

We have confirmed a list of Female Coaches from across Canada who are excited to be part of the inaugural event. There’s still more to come, and the full list of participants will be released at a later date, closer to the start of the event itself.

With that being said, we are still looking for coaches who want to share their story with the basketball community and help inspire the next generation! If you’re interested, send us an email or reach out on social media and we’ll figure out a time that works best.

If you have any questions on the event, please feel free to send us an email or reach out on social media, as well!

More information on the event will follow in the coming days as we lead up to the event.

The goal of Four Quarters Media is to spotlight U Sports and CCAA Men’s and Women’s Basketball to the best of our ability, giving them the love and attention they deserve. The First Annual SpeakHER Series is the first of many projects that will allow us to achieve our goal.